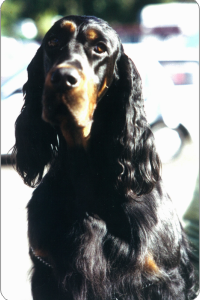 My first Gordon Setter was Black Watch Loch Rannoch from the Black Watch kennels in Christchurch. He was thoroughly spoilt and despite all that he was the first Gordon Setter in New Zealand to win Best in Show at an All Breeds Championship show. He was so special but died far too young from tetanus at 6 years old. Of course once I had “Angus” I had to have some girls to join him and so Rainbird Intrigue and Rainbird Rebecca came out from Australia as my foundation bitches for the kennels. These two half sisters both had litters to Angus. “Abby” (Rainbird Rebecca became an Australian and NZ champion but “Bonnie” (Rainbird Intrigue) hated the show ring. However it was Bonnie who produced the top winning Gordon Setter CH Weblyn Always Bryden – affectionately known as “Hairy Angus”.

“Hairy Angus” won two Best in Show (All Breeds) awards and narrowly missed being the first NZ Grand Champion by going reserve in show to a Maltese at one of his last championship shows.

“Hairy Angus” was a much loved companion and died at 13 years during our time in Wellington. He left behind two champion daughters that I kept. One of these girls – CH Weblyn Megan J’Intrigue “Morag” was mated to BIS winner CH Fleckwood Azzaro and produced two champion youngsters: CH Weblyn Mister Moran (“Mr Morgan”) and CH Weblyn Ma Belle Intrigue (“Millie”).

In early 2000 we made the move to Auckland and once the kennels were built we were all reunited – Morag, Millie, Meggie and Morgan, although we did all share the garage for another 6 months! Millie was a very special girl and I imported semen from the Triseter kennels (Melbourne, Australia) for her. This young dog was the show winner Aust. CH Triseter Ebonie Yarra and this litter produced the Grand Champion Weblyn Nostalgia at Azzaro for Karen and Ernie Leslie. Now six years later my girl from this litter – CH Weblyn an Intrigue in Ngarnya has produced a beautiful litter of pups to the show winner – GR. CH Triseter Celtic Ice.