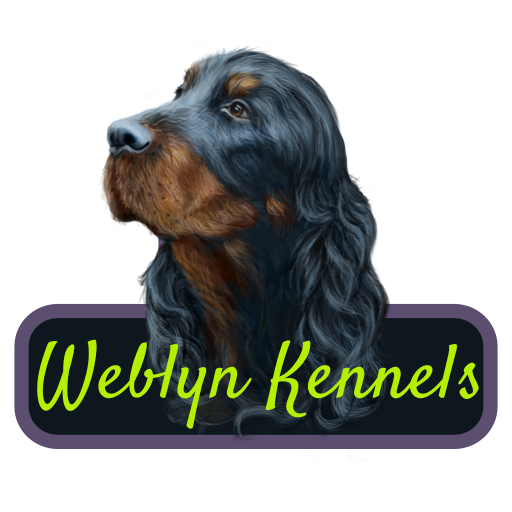 Gordon Setters have been a part of my life for over thirty years now and I cannot think of a time without them. The kennels started many years ago in Wanganui with a lovely Gordon Setter from Black Watch kennels in CHCH and two bitches I imported from Australia. “Angus MacTavish” my first Gordon was also New Zealand’s first Best in Show winning Gordon Setter. His son “Hairy Angus” was also a multi Best in Show winner, specialty Best in Show winner and overall a really delightful character. He narrowly missed being the first NZ Grand Champion by going runner up to a Maltese at one of his last championship shows.

We moved to Wellington in the ‘90’s and showing became less frequent as I commenced another round of study with my MBA. “Hairy Angus” was a much loved companion and died at 13 years during our time in Wellington. He left behind two champion daughters that I kept. One of these girls – CH Weblyn Megan J’Intrigue “Morag” was mated to BIS winner CH Fleckwood Azzaro and produced two champion youngsters: CH Weblyn Mister Moran (“Mr Morgan”) and CH Weblyn Ma Belle Intrigue (“Millie”).

The MBA was completed in 1999 and in early 2000 we made the move to Auckland. The dogs had to live in boarding kennels for some considerable time while we lived in a flat and then in an extended garage on the 2.5 acres we bought in Clevedon on the periphery of Auckland. Once the kennels were built we were all reunited – Morag, Millie and Morgan, although we did all share the garage for another 6 months! Millie was a very special girl and I imported semen from the Triseter kennels (Melbourne, Australia) for her. This was the show winner Aust. CH Triseter Ebonie Yarra and this litter produced Grand Champion Weblyn Nostalgia at Azzaro for Karen and Ernie Leslie.

We have been in the Clevedon area for 17.5 years now and have developed a bare plot of one hectare into a well-established garden and orchard. Gardening is obviously another keen interest that is balanced with dog showing. Alongside these interests my background in medical science means a keen interest in canine genetics and canine health. In the last three years I have been interested in canine behavior and the influence of those very early formative weeks of a pup’s life. I have provided a link to Jane Killion and her research into Puppy Culture in the Notes and Links section of this site.

The Gordon Setter is a reasonable size dog standing roughly 65 cm (26 ins) at the shoulder. Compared to the English Setter the Gordon is roughly the same height but a heavier build. He is heavier and more solid in appearance than the Irish Setter also. The overall appearance is one of stamina and strength rather than speed. All Setter heads have the same basic outlines as adults but the Gordon has a more pronounced stop with the muzzle slightly shorter in length than the stop to the occiput (NZ and UK Standards) and a larger more rounded skull than their Irish and English cousins. The head should be deep rather than broad. Ears are set low roughly level with the eye. The black of the coat is shiny coal-black and tan markings are present on the muzzle, above the eyes, two spots on the chest, under the tail and on the lower legs and feet. Pencilling in black on the toes.

www.puppyculture.com See the Learning Centre for videos and further reading. Jane is the director of “Puppy Culture: The Powerful First Twelve Weeks That Can Shape Your Puppies’ Future”.